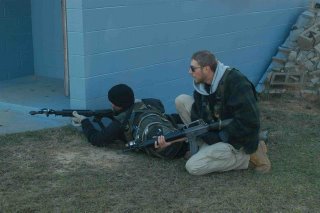 Our son Jeff is finishing his last year in the Army at Ft. Polk. For the past several years, Jeff has been part of the 509th Airborne Infantry, also called the Opposing Force, or Opfor. The 509th trains over 40,000 Army and National Guard soldiers before they are deployed overseas.

This months issue of Wired (June 2006) has a great article about the 509th and some of the high tech gear that they use in the training. The article should get published online Friday, May 26th at http://www.wired.com/wired/.

In August, Jeff and Vicki will be moving to Orlando where Jeff will be attending Full Sail, School of Film, Art, Design, Music & Media Production.